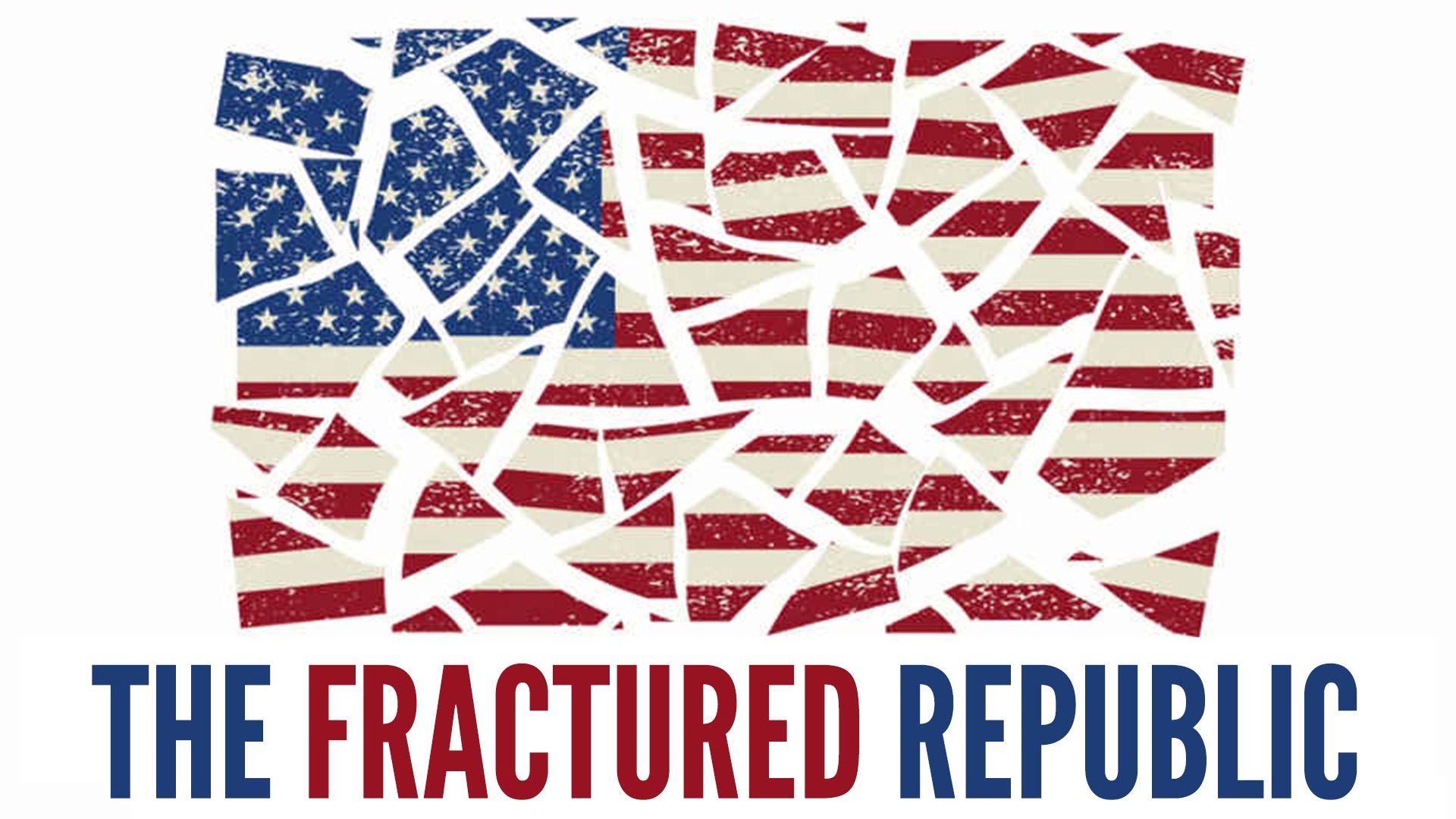 Americans today are anxious—about the economy, about politics, about our government. The institutions that once dominated our culture have become smaller, more diverse, and personalized. Individualism has come at the cost of dwindling solidarity. No wonder, then, that voters and politicians alike are nostalgic for a time of social cohesion and economic success.

But the policies of the past are inadequate to the America of today. Both parties are stuck presenting old solutions to new problems. In The Fractured Republic, Yuval Levin details his innovative answers to the dysfunctions of our fragmented national life. By embracing subsidiarity and diversity and rejecting extremism and nostalgia, he believes we can revive the middle layers of society and enable an American revival.

Though only 272 pages long, this book took me more than a month to read, partly due to remodeling and other side projects, but mostly because it’s a “thinking” book. Hardly a page went by without causing a new realization, making a pointed reminder, or bringing up an excellent suggestion.

I cannot recommend this book enough: it gives a framework for understanding much of our current political climate without specifically assigning blame, and offers convincing suggestions for remedying it.

The first half of the book looks at some history from the 1950s through the present, pointing out specific different areas that those on the Left and Right embrace and would like to bring back, and the second half makes a number of suggestions for moving forward.

Below is a basic outline of the book, along with a number of quotes and thoughts that really stuck out to me.

Part I: Out of One, Many

The Left and Right both long for specific time periods from the past half century and strive to return to the benefits they see from those times: “Democrats talk about public policy as though it were always 1965 and the model of the Great Society welfare state will answer our every concern. And Republicans talk as though it were always 1981 and a repetition of the Reagan Revolution is the cure for what ails us.” (page 15).

This nostalgia blinds us to many of the changes that have taken place in our country and culture during this time period.

He also thinks that we see these years as if we were looking at the life of a person in the Baby Boomer generation:

This chapter alone is worth getting the book just for understanding the context of current political viewpoints, discussions, and goals.

As the US came out of World War II, we were a strong, unified, consolidated country—partly due to rationing and the clear moral struggle we perceived between democracy and Nazism/fascism. However, Levin argues, it was a unique “bridge” between two Americas: the increasingly unified and centralized society and government in the first half of the century, and the increasingly diverse culture in the second half.

In the 1950s, much of the country was still relatively consolidated economically due to necessary regulation during the war years, and it was also a low point for immigration as well: by 1950, the percentage of US residents who had been born abroad was 7% (down from 15% in 1910) and down to just 4.7% in 1970.

The 1960s–70s saw many changes and liberalization of culture, economy, etc., with more focus on individualism and a growing distrust of big government, labor unions, and consolidated power.

In the 1970s, Republicans and New Democrats realized that liberalization was not to be resisted and they should instead work with the diffusion and fracturing.

In the 1980s and especially the 1990s, rising inequality and diversity moved people away from large cultural institutions and networks and into smaller more niche networks.

American life continued to be concentrated, but at both ends of the spectrum (in ways that pull us apart) instead of in the middle (in ways that bring us together).

Not surprisingly, the Left and Right have different explanations for the societal fracturing; the Left blames it on economic equality, while the Right pins it on cultural disintegration and polarization.

Essentially, the Left sees economic change as the root of many of our current issues, while Right sees cultural change as the cause, and both tend to overlook or deny the diffusion and decentralization of society in the past half century.

A couple more pointed reminders from this chapter include these:

Part II: The Next America

“The Left distorts or exaggerates America’s economic problems and the Right discounts or ignores them. So what are they missing? What are those problems? …The core of what our bipartisan nostalgia obscures has to do with the effects of persistent diffusion and diversification—which in this case involves especially the effects of an intensifying specialization in our economic life.” (page 113).

Social conservatives for a long time “could plausibly believe that their views about the ideal firms and norms of society were in fact very widely shared” (page 156), while recognizing that many people failed to live up to them. They could see themselves as a “‘moral majority,’ overtly opposed only by a small if influential sliver of radical cultural elites.” (page 157). Increasingly they must—and have—realized that they cannot expect the political system to fit their views.

“Convictional believers” numbers have not changed much, but nominal Christians are becoming unaffiliated. “Many have ceased to view religious traditionalism as an ideal with which to nominally identify and have come instead to see it as an option to reject.” (page 159).

Religious traditionalists no longer speak for the majority or set the standard, and are out of practice defending it. They tend to lament what has been lost more than what might be gained.

The Left looks ahead and sees economic collapse; the Right, moral collapse.

“All sides in our culture wars would be wise to focus less attention than they have been on dominating our core cultural institutions, and more in building thriving subcultures.” (page 165).

Religious liberty has become the “chief rallying cry” for conservatives and is essential, but not sufficient.

“Expressive individualism, if taken all the way to its logical conclusions, points toward moral chaos, and moral traditionalists are therefore its natural critics and opponents.” (page 172).

“In our time, the greatest threats facing social conservatives come not from the profusion of moral practices and views in American life, but from the efforts of some on the radical Left to use liberal-dominated institutions (from the federal bureaucracy to universities, the mainstream media, and much of the popular culture) to suppress and exclude traditionalist practices and views.” (page 173)

The best method to fight back is to build genuine, caring communities, rebuilding the mediating institutions and “keeping things at the human scale.” (page 176).

“Those seeking to reach Americans with an unfamiliar moral message must find them where they are, and increasingly, that means traditionalists must make their case not by planting themselves at the center of society, as large institutions, but by dispersing themselves to the peripheries as small outposts.” (page 178).

Centralized national policies cannot fix the diffuse issues and problems in society. Genuine human connections and community (and the Gospel) can address individual needs, and perhaps we need to grow a new national identity from the bottom up.

Chapter 7: One Nation, After All

This nostalgia for mid-century America blinds us to its bad effects, causes us to keep trying the same formulas, and hinders us from seeing solutions to the very different conditions we have now.

We should use the multiplicity of our society rather than seeing only two binary options of consolidation and individualism. “As a centralized government [the favored solution of the Left] draws power out of the mediating institutions of society, it leaves individuals more isolated; and as individualism [the favored solution of the Right] further erodes the bonds that hold civil society together, people conclude that only a central authority can pick up the slack. That dangerous feedback loop keeps us from seeing the possibility of other sorts of solutions to the problems we face.” (pages 186–87).

“Their arguments are, in effect, about whether our government should do more or less of the same, and it is not hard to see why the public often finds these debates pointless.”—p187

“[I]nstead of applying their increasingly distinct worldviews to contemporary problems, each party has tended to understand its own increased coherence as an argument for persisting in old policy ideas—for completing the inherited checklists of the Right or Left. Each party so powerfully identifies its political objective with a particular moment in the past that neither is inclined to apply its insights to today’s different circumstances. The name of this problem is nostalgia or anachronism, not polarization.” (page 189; emphasis mine).

The past half-century has seen a growth in personal liberty, as defined by the Left: “the individual’s freedom from coercion and restraint—in essence, the freedom to shape one’s life as one chooses” (page 199), with these limits:

The Right’s definition of liberty “is mediated by the concept of rights, and especially property rights.” (page 201).

Both definitions take for granted the idea of the free human person; the free human informed and capable of using their freedom well is a great achievement socially and has not been seen much throughout world history.

“The liberty we can truly recognize as liberty is achieved by the emancipation of the individual not just from coercion by others but also from the tyranny of his unrestrained desires.” (page 203) This requires moral formation by those middle institutions which are pulled apart from above and below:

Not everybody has access to these institutions, and reinforcing, sustaining, and “especially putting them within the reach of as many of our fellow citizens as possible must be among our highest and most pressing civic callings.” (page 205)